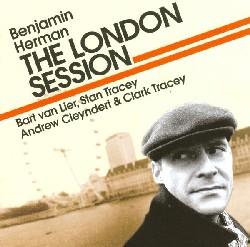 The London Session’ released on 25 september by Dox Records. As one
of Holland’s ground-breaking jazz musicians, Benjamin Herman is a
much sought-after soloist. He’s a player who’s cut more than his share
of jazz work over the years and a.o. known for playing with New Cool
Collective, Han Bennink and Paul Weller. Also he appeared on over
a hundred records with all kind of artists, from Misha Mengelberg
to Candy Dulfer.

In 2005 Benjamin was invited to progamme Rotterdam’s International
Jazz Festival and being a huge fan of Stan Tracey, he managed to track
Stan down for a gig together with Dutch trombonist Bart van Lier.
After this succesfull show Benjamin asked Stan to record a album with
him and so the London Session was a fact. An album especially for
people who love music in it’s purist form!

British pianist Stan Tracey is rarely a sideman these days, but here
his taut trio performs with the excellent Dutch alto saxophonist Benjamin
Herman and trombonist Bart Van Lier. It is a 2005 studio set, with
repertoire covering four boppish or Latin-grooving Herman originals
and three jazz standards. Herman combines up-tempo agility with an
attractively bitter tone on long notes and a fondness for vocalised
warbles that suggest Art Pepper. Van Lier is a smooth trombonist with
a bright sound (though a distracting tendency to early-jazz pastiche).
Tracey’s zigzagging figures and double-taking silences signify an
elder statesman still at his peak. Straightahead, but with kinks.