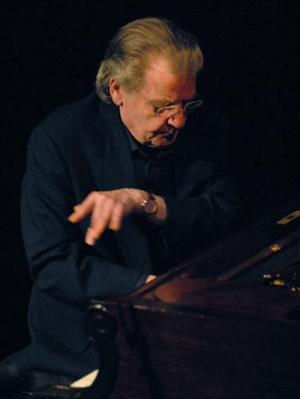 Interview below by John Eyles

Often referred to as the Godfather of British jazz, Stan Tracey has had an illustrious career in music spanning over sixty years. Despite his status, Tracey is surprisingly modest, even self deprecating about his achievements, happy to leave it to others to analyse and praise his work. He recently released an album of free playing in a duo with Louis Moholo-Moholo, entitled Khumbula (Remember). I started by asking him about this.

Stan Tracey: There was no preparation; we just went in and started playing. There were no words at all concerning the music that passed between the two of us. The red light went on and we started playing. The album was Louis’s idea because he was going back to South Africa to stay. Before he went he wanted to make an album with me. So Hazel Miller of Ogun Records , who Louis records for, she put the whole thing in motion.

AAJ: It was produced by Evan. How did Evan get involved?

ST: He does a lot of work in that studio [Gateway Studio, Kingston, England] and he is a close friend of all of us. I think Hazel asked him to produce it.

AAJ: Last year you did the Suspensions and Anticipations album with Evan for his label. That is two freely improvised albums in the past year. That is the first free recording you’ve done for ages. Is that coincidence or is it a trend?

ST: No. Usually I play straight ahead music. If I’m asked to play free music. I’ll do it.

AAJ: It just happened that you were asked twice in close succession.

ST: Yes. Over the years, Evan and I have played various times together. None has been recorded before. Last year was the first time.

AAJ: So if you were asked again, you’d do it. Have you got anything else planned along those lines?

AAJ: What about live dates with Evan?

ST: I’ve just done one up in Gateshead, for the festival. And we’re going to play together in Appleby in July.

AAJ: I was trying to work out when you first got into free playing. Was that back in the 60’s?

ST: In the 70’s. I did albums with Keith Tippett, Mike Osbourne and John Surman.

AAJ: Had you done any free playing prior to that?

AAJ: You played at the Little Theatre Club, didn’t you?

ST: I used to play with John Stevens and Trevor Watts. All that started in the early 70’s. But we’re talking thirty years ago, so I can’t remember. I didn’t play there that often.

AAJ: Who else would have been there at that time?

ST: Trevor Watts, John Stevens, Harry Miller. And sometimes someone from the Brotherhood [of Breath]. Dudu Pukwana or Mongezi Feza. But not too much of those guys, just now and again.

AAJ: You’d done bits of free recording with the New Departures Quartet in the early 60’s hadn’t you?

“[About ‘Under Milk Wood’] I’m more mystified than proud. Mystified by the success it has had.”

AAJ: On one of those BBC documentaries in the Jazz Britannia season, there is a quote from you, when you’re talking about free playing. You said they were happy times socially and musically but there was always a part of you that wasn’t confident because you didn’t have the rhythm section as a crutch to support the whole thing.

AAJ: Which do you prefer? Would you go for time and changes and arranged stuff over free music?

AAJ: When you practice, is there any element of free, when you are just playing?

ST: When I go to the piano at home, it is not to play, it is to practice. I never play anything other than what I practice. And that is just chops.

AAJ: There has been good reaction to the album with Louis, hasn’t there.

ST: So I’m told, yes. I don’t get to see any music magazines here in St. Albans. It’s not known for its jazz coverage.

AAJ: Were you pleased with your own playing on it?

ST: No-one’s ever pleased with their own playing. They can always listen to it and think, ‘I shouldn’t have done that there. Maybe the end of that bit worked.’ One is always super-critical when listening to a playback of an album. You wish you’d done that there or hadn’t done that there. It’s like that.

AAJ: Is that more so with free playing?

ST: No, no. It’s the same. I don’t think there’s a musician around who listens to his recordings and thinks, ‘Christ, I was bloody marvellous.’


Tracey’s most famous album is Under Milk Wood which he first recorded in 1965. On more than one occasion, it has been cited as the best British jazz album ever. Two further versions of Under Milk Wood, one with Donald Houston speaking Dylan Thomas’s verse and one with Philip Madoc doing so, have been released since 1965. When the subject of his most famous work came up, Tracey’s reaction was typically understated…

AAJ: Anything else in the pipeline at the moment?

ST: No recording. Just a couple of gigs. Nothing else spectacular coming up. Under (Bloody) Milk Wood again!

AAJ: It sounds like that is a millstone around your neck !

ST: It is a sort of millstone around my neck, but a happy millstone financially. It is the fortieth anniversary this April, since I wrote it and we are going to do a broadcast on Radio Two with three actors, Phillip Madoc, Ruth Madoc and Victor Spinetti. The players will be Bobby Wellins, Clark and Andy, the quartet.

AAJ: When is that coming out?

ST: I will be recorded in April and broadcast in May. It is being recorded at the Mermaid Theatre.

AAJ: It’s for the radio; it’s not going to be a CD recording.

ST: Oh no. We’ve already got one out with Philip Madoc, which was the third released version.

AAJ: How do you feel about doing it all over again? You sound a bit resigned to it.

AAJ: But you must be proud of it.

ST: I don’t know. Actually, I don’t do much in the proud area. I’m more mystified than proud. Mystified by the success it has had.

AAJ: When you were writing it, did you not feel it was something special?

ST: No, not particularly. It was something I had to do to make an album forty years ago. I can’t remember too much about it. I suppose I was pleased with what I wrote otherwise I wouldn’t have recorded it.

AAJ: But it does seem to have taken on a life of its own over the years.

ST: It surely has.

AAJ: Apart from that, what’s coming up?

ST: It’s very sparse so far this year, the odd date here and there. Nothing mega. I might be making an album with Guy Barker. I’m waiting to find out about that. We’re in Rotterdam at the festival in September with the trio.