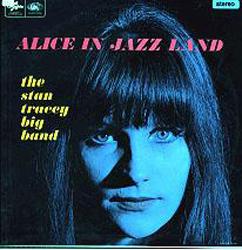 Portrait of a Queen

There is nothing special about this record.
Except that a British
big band is actually recording; except that Stan Tracey is one of our
few jazz musicians of world class; except that he wrote this brilliant
suite mostly between the hours of four and six on a number of winter
mornings, partly on trains and buses; except that there may be no more
such suites unless someone buys him a few more records:except . . .

Nothing, you see, is quite
what it seems, nor means quite what it says. Like that opening sentence.
Like in Wonderland.
This could become very
involved indeed. Let me explain.
The fact is that in 1965
Stan Tracey, the March Hare of Frith Street, produced a suite, inspired
by Dylan Thomas’s Under Milk Wood. Played by his quartet, if turned
out, in the opinion of several Mad Hatters, otherwise critics, to be
a powerful runner for the title of Best British Jazz Record in History.
Tracey went into Milk
Wood largely because he owns a record of the Thomas classic. He knows
it backwards; he was moved by the beauty, the magic, the starless-and-bible-blackness
of Thomas’s language. He owns (at time of writing) only one other narrative
record, Alice in Wonderland, with which his ears have long time been
bent usually at the request of his children, Clark (5) and Sarah (3).
He likes that too. And it seems inevitable that, after Milk Wood, he
should have put his feelings about Lewis Carroll’s story into music.
This time, though, the
writing is for big band, which challenges Tracey’s skiIls even more
sharply than composing for the looser quartet framework. If seems to
me to have come off quite as superbly as did Milk Wood; indeed, the
instrumentation gives Tracey far more scope for his very idiosyncratic
talents. There is a richness, depth and variety to this music which
is thoroughly captivating.
The dawn-patrol flavour
to Tracey’s composing life is not a Carroll-like fantasy. It is one
of the hard facts of earning a living in a hard world. Most nights he
plays till deep into the morning at Ronnie Scott’s Club in Frith Street,
London. He goes home by bus at around 4 a.m. and finds that he writes
best before he goes to bed. He also finds the bus a tolerable place
in which to jot down musical ideas; he does the same in the train that
takes him to work. The temptations, and perils. of “programme music”
are well-known. The composer can’t do more than express in music his
own reactions to the character or situation a writer has created through
the medium of words. The listener may not see it the way the musician
does; equally he may read into the music far more than is really there.
Tracey is sensibly unpedantic
about this. He aims to do no more than “slant the mood towards the title”.
But however modest he is about this, Tracey’s Alice score has completely
caught the mad, strange whimsical world of Carroll. This, in a sense,
springs from Tracey’s own musical gifts. He is an extraordinary pianist,
always choosing the unusual way of saying things. He must be tired of
being compared to Thelonious Monk, especially since he has now evolved
his own completely personal style, but he shares with Monk the love
of strange-sounding themes, of fractured rhythms, of calculated discord.
Tracey’s is, in the true sense of the word, a fantastic style. Carroll
was a fantasist too.
Every piece on this record
reflects Carroll’s story in some way. Teatime Gavotte, which has solos
by Bobby Wellins. Keith Christie and Tracey himself, is as full of odd
quirkiness as was the tea party. Tracey’s piano, particularly, sets
the mood, but the composer won’t say which soloist represents Mad Hatter,
Dormouse or March Hare. Portrait of a Queen, a fast waltz, with Eddie
Blair and Wellins taking solos, sounds both a touch zany and quite overwhelming
:well, wasn’t she? Summer Hallucinations, a showpiece for Alan Branscombe
and the saxophone section, has the faintly unreal quality of a hazy,
hot, summer’s afternoon.
But I’ll not strain the
point too much. Other details : Afro-Charlie… has solos by Wellins
and Les Condon; the tenor on Pig and Pepper (quartet only) is Ronnie
Scott, who is also heard on the title track; Murdering the Time features
Kenny Baker and Christie. Fantasies in Bloom is both the tune which
has Tracey’s longest solos and the one I happen to like most of all.
Lovely and languid, it has the feel of Ellington at his best, especially
in the beauty of the saxophone sounds and the cleverness of the writing
for brass.
One more thing : this
music swings like mad, always. And that’s to do, one suspects, with
the infectious way the musicians got caught up with the fun of the music
at the recording sessions. Those sessions were a touch mad too. At one
of them, when the band was trying hard to get the ending of Murdering
the Time right (it’s very difficult to play, time-wise), everything
seemed perfect apart from a mysterious extraneous noise. “Harry”, someone
explained. “had to blow his nose in the last eight bars”.
I hope you enjoy the music
as much as I do. Me, I’m just starting off a collection to buy Mr. Tracey
another record. Hamlet, maybe?